The first record of Gaelic football being played in Carrickmore can be found in ‘The Ulster Herald’ in December 1906. However, it was not until 1932 that Fr. James McGilligan, a curate in the Parish of Termonmaguirc, along with Jimmy (Denis) Nugent, David McCallan, and Mickey (Nancy) McGurk and a number of other like minded individuals resolved to formalize the structure of Gaelic games and culture in the parish; and so Carrickmore St. Colmcille’s GFC was founded and first affiliated to the West Tyrone Board of Cumann Luthcleas Gael. On April 17th 1932 the club’s first official match was played against Augher in James Grogan’s field. Since then we have gone from strength to strength have become the most formidable Gaelic football force in the county.

An Charraig Mhór won a host of St. Enda cups from the 1930’s through to the 1970’s, but it was in 1933 that the club’s longstanding romance with the O’Neill Cup (the Senior football championship trophy) began.

To quote “The Carrickmore Tradition”,

“The Carrickmore players, officials and spectators could not possibly have imagined what fascination this competition would have for future generations of Carmen folk. From that date to the present day, year in year out, the companionship of O’Neill has been sought after by Carmen.”

In 1941 Club Naomh Colmcille eventually won that elusive prize, beating Dungannon in the championship replay by 1-5 to 0-4 (1940 Championship). Since then our club has won the cup more times than any other in the county and now proudly holds the record of 15 Championship titles, the last in 2005. In the late 1970’s, Carrickmore became one of an elite number of clubs to win the O’Neill cup three years in a row.

An Charraig Mhór has the envious distinction of being the only club in Tyrone to have remained in senior football ranks since its inception. The club collected the Division 1A League title in 2000 and now also holds the record of eight All-County League titles.

The introduction of reserve football in the county allowed the participation of much greater numbers of players and the initiative was embraced warmly by our own club who now view the senior/reserve panel as one with a flow of young players passing from reserve to senior ranks. Since its inception our club has captured the Reserve Championship 5 times and the Reserve All County League 5 times also.

Successive generations of clubmen and women have represented their colleges, their county, their province and their country; from Packie Madden, who became the first Carrickmore man to wear the county jersey in 1933, to present day County star’s Conor Gormley and Mark Donnelly. No one represented the Club with more distinction than the irrepressible Frankie Donnelly, who played for Tyrone in the 1950’s and 1960’s. Frankie starred for the break through Tyrone side of 1956 and 1957 and his inter- county scoring record of 4 goals and 11 points in a Lagan Cup game in 1957 has never been equalled by any player in any county in Ireland.

Some sixty years after the club’s formation An Charraig Mhór ladies team officially came into existence in 1992, having previously competed in various tournament competitions. The girls lost no time in chasing the records set by their male counterparts.

In the club’s inaugural year, the Tyrone Senior League and Championship ‘double’ was claimed. The girls went on that same year to lift the Ulster Club title. The following 14 years has seen Mna na Carraige Moire establish the club as the most formidable force in the ladies game in Tyrone.

The club leads the county roll of honour with three Ulster Club Championships and 11 County Senior Championship (last won in 2008) titles and 12 Senior League titles (last won in 2011). An agonising defeat in the All Ireland Senior club final in 2002 saw us fall short of achieving the highest accolade in ladies club football. 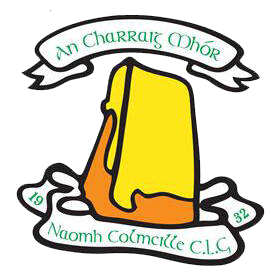